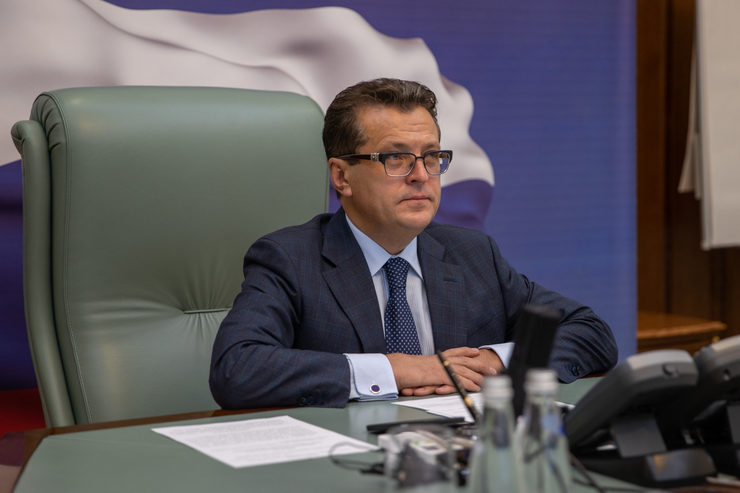 The participants discussed the creating of a comfortable urban environment and the treatment of stray animals.
read more
News

I.Metshin: “Once, we set the goal that half of Kazan citizens play regular sports, now we have already surpassed the mark”

This summer, Kazan will host several major sporting events. Every year more and more residents join the competitions that take place in the capital of Tatarstan, including not only young people, but also the older generation, the Mayor of the city Ilsur Metshin said at the Business Monday in the Executive Committee.

The infrastructure developed in the city in recent years contributes to the promotion of sports and a healthy lifestyle among citizens. “We annually and systematically create conditions for sports in all districts of the city. This year, four new multifunctional sports grounds will be built, in addition, sports equipment will be installed at the renovated yards,” - I.Metshin said.

According to Albert Salikhov, chair of the Committee of Physical Culture and Sports of Kazan, the summer sports season will be very eventful in the city.

A.Salikhov drew attention to the fact that races are particularly popular among the citizens. The sports season was launched on April 22, when 79th traditional athletic relay took place, which was dedicated to the 60th anniversary of the first manned flight into space by Yuri Gagarin.

On May 1 and 2, the Kazan Marathon was held for the seventh time with the participation of more than 14 thousand people from 67 regions of Russia and 29 countries.

Another race was held on May 8 in the village of Derbyshki – an athletic relay dedicated to the 76th anniversary of the Victory in the Great Patriotic War. More than 350 people took part in it. On May 30, the sports events baton will be passed to Zabeg.RF. This is the largest half marathon with a synchronized start.

The summer football season started on May 20 by the city stage of the All-Russian tournament “A Leather Ball”. More than 300 young football players, as well as Russian football stars Dmitry Sychev, Evgeny Aldonin and Dmitry Alenichev, took part in its opening at the Trudovye Rezervy stadium. After the official ceremony, there was a unique football match, in which 80 players and famous guests played together.

At the same time, the city launched the Kazan football championships among sports schools, as well as football veterans. In total, more than 3,500 football players from 186 teams will take part in the competition.

In addition, this summer Kazan will host several major competitions. On June 19, the international triathlon competitions Ironstar Kazan 2021 Timerman Cup will be held at the Olympic and semi-olympic distances. The swimming stage will take place in the water area of the Kazanka River. The bike route is laid along the central streets of the city.

On July 31, amateurs together with professional athletes from different regions of the country will participate at the Tour de Tatarstan Kazan cycling race with distances of 25, 50 or 100 km.

“Special attention will be paid to high-level sports. This year, Kazan hosts the final stage of the V Summer Youth Spartakiad. The first competitions have begun, and throughout the summer, more than 9,000 strongest athletes from all over Russia will compete for the title of the winner of the Spartakiad at the main sports venues of the city, in 31 sports”, - A.Salikhov concluded.

Multimedia
Previous news
I.Metshin: “The Directorate of Parks and Squares has grown significantly, now the main task is to hold positions and move forward”
Next news
Ilsur Metshin got acquainted with the work of the first in the city sustainable automatic wheel wash at the construction site
Personal
Official site