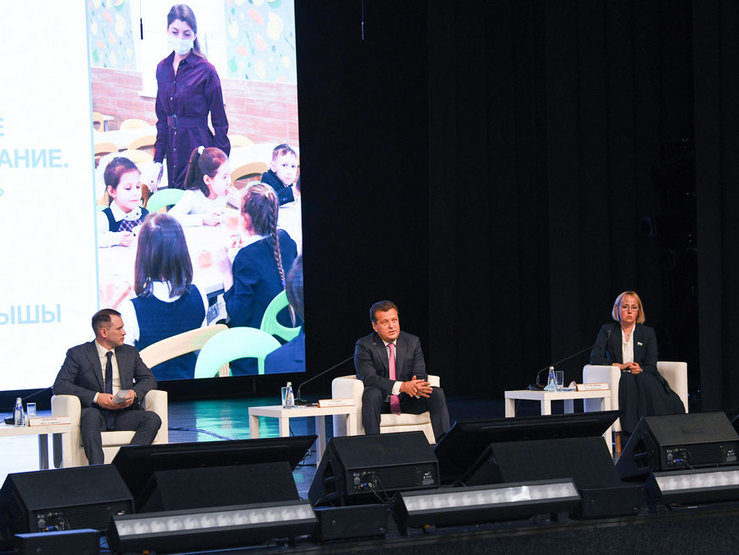 I.Metshin on school nutrition: “Our results are known at the national level, but it is important for us to be the best, not the first”

The Mayor of Kazan discussed with parents and school directors the results of the Parental control project.
read more
News

I.Metshin visited a new “Svoi” youth club in the Kirovsky district of Kazan

A new “Svoi” youth club opened in the Kirovsky district of the city. It hosts events for Kazan residents from 14 to 30 years old, as well as classes of the school of leaders of the Yal municipal center. This year, a record number of youth leaders will be trained here – 350 people. The new youth space was inspected by the Mayor of the capital of Tatarstan Ilsur Metshin.

The club is located at 11 Khalturin Street, the building was built in 1953. Previously in this facility with an area of 115 sq. m. m was a pharmacy warehouse. “We decided that there are not enough youth spaces in this district. There are youth clubs in the Kirovsky district, but there are not enough new hot spots, - said the chair of the Committee for Children and Youth Affairs Ayrat Faizov. - That's why we applied for the republican program, and we were supported by the Ministry of Youth of Tatarstan”. The design of the club started in early 2020, and the renovation work was completed in December. And in February, the new youth club was opened.

The center is divided into two halls that can accommodate up to 30 people. It is expected that up to 200 people will attend the club every month. For example, in February, SMM classes, art therapy classes, a board game championship, a lecture on fire safety, as well as a master class on modern dance are planned here. The bright modern design of the new space, intended as a coworking area or a time cafe, inspires for creativity, and the walls are decorated with motivational posters.

There is also a school of youth leaders here. Classes started in February and are held three times a week, future leaders learn the basic principles of safety, first aid, pedagogy, psychology, and analyze cases. The training will be completed in April. “For the summer time, we have planned 54 shifts in 14 camps. This year, we are preparing a record number of youth leaders – 350 people, because updated camps will open after the program of renovation”, - Ekaterina Belova, head of the methodological department of the Yal municipal center, shared her plans.

“15 years ago, we were faced with the issue of preserving youth camps. We have been told that it is no longer cool and became outdated. It is great that we have preserved a network of country camps nearby Kazan – Ilsur Metshin said. – We thank Tatarstan President Rustam Minnikhanov for the renovation program. Now it is not just camps, but the year-round recreation facilities.”

Ekaterina Belova said that in November, employees of youth camps from all over Russia came to Kazan for the All-Russian seminar. The visitors got acquainted with the renovated camps in Kazan. “You can hardly imagine how they were impressed!” - she shared with the Mayor.

For information, over the past five years, 59 out of 65 youth clubs have been renovated in Kazan. In addition, four camps were overhauled under the republican program last year: Zarechye, Vostok, Unitur and Molodezhny.