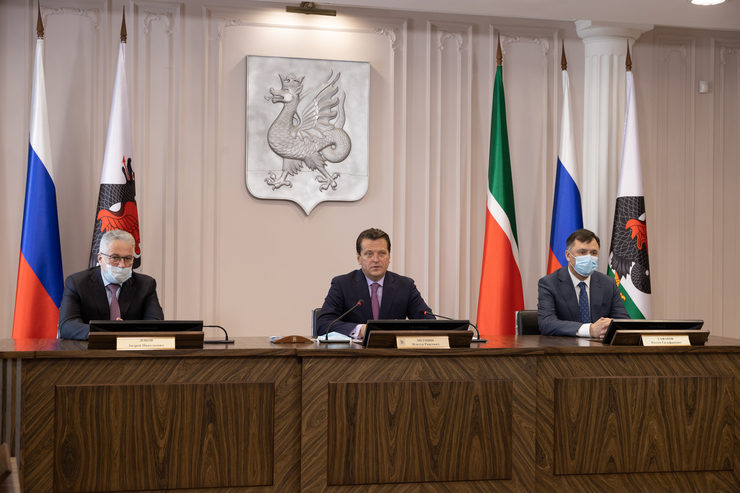 I.Metshin at the first session of the Kazan Youth Parliament: “Your task is to represent the youth of Kazan in all its diversity”

The first session of the Kazan Youth Parliament was held today at the City Hall. The meeting was held by Evgeny Chekashov, Chair of the standing commission on youth affairs, physical culture and sports of the Kazan City Duma.

Opening the meeting, Ilsur Metshin congratulated the members of the Youth Parliament on their election.

“You were elected for 2 years, this is a long term. During this time, you can do a lot. Moreover, you can continue working. The world is your oyster. I believe you will be creative and handle the challenges facing the city at the forefront. The Kazan City Duma and the Youth Parliament have the same goals and objectives, we are ready to listen to you. As a Mayor, I would like to see you as genuine assistants, because Kazan is our common home. We live and work here. And tomorrow, of course, is yours. What it will be depends largely on how we cooperate you today”, - I.Metshin emphasized.

Representatives of the newly formed commissions of the Youth Parliament spoke at the meeting. They spoke about the key areas of work, tasks and plans. Idel Kiyamov, the host of the state TV and radio company “Tatarstan”, told about the preservation of native languages and the development of interethnic relations among the youth of Kazan.

The head of the Medical Volunteers of the republic of Tatarstan movement Anna Makarova raised the issue of ecology and promotion of separate waste collection, health protection and development of a healthy lifestyle in her speech.

In addition, a student of the Kazan Medical University, Irakli Chanturia, suggested to engage doctors in the students mentoring program.

Liana Pakhareva, Director General of the center for support of the self-employed, told about youth entrepreneurship, employment and self-realization.

Nina Shimina proposed to organize a co-working space for young mothers in Kazan. According to her idea, women could work here for several hours a day while a nanny to take care of their kids.

Ilsur Metshin highly appreciated this initiative, but noted that there is no need to build a separate building for its implementation. “We have a huge number of youth clubs in our city. We can provide all the necessary conditions for mothers to work here- offices, Internet, computers”, - the Mayor said and instructed the Committee on children and youth affairs to work on this issue.

Besides, the Chair of the Youth Parliament was elected at the meeting. It became the head of the organizational sector of the Tatarstan Accounts Chamber Maria Vyugina. Among the main activities of the Youth Parliament in the upcoming years, she sees the active involvement of young people in volunteering, their education in the spirit of mutual respect and ethno-cultural development, work to create conditions for self-realization of young people, support the self-employed, and the introduction of educational programs on financial literacy.

“In every speech, I’ve heard views that I absolutely share and will fully support. A way always begins with a first step. Kazan is a pilot city for many projects, many of them were first introduced here. It is always difficult, but it is very important,”- the Mayor said, summing up the meeting.

For information, the decision to create a Youth Parliament was made at the XLI session of the City Duma.

Multimedia
Previous news
I.Metshin: “We are 2 km closer to our dream- to connect the Great Kazan Ring road”
Next news
I.Metshin: “The task of the municipal authorities is to create decent conditions for sports”
Personal
Official site