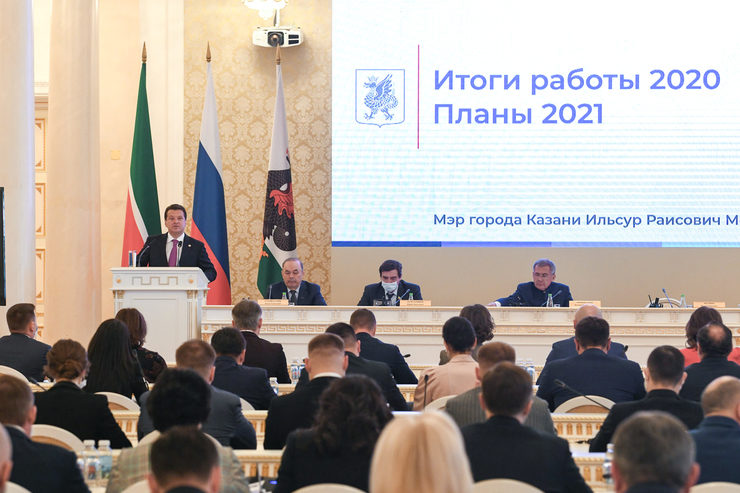 The Mayor made a report at the V session of the Kazan City Duma on the implementation of the “20 Goals of Kazan for 2020” program.
read more
News

The Mayor of Kazan awarded Andrey Pisarev, a hockey player, for his contribution to the development of sports of Tatarstan

The Mayor of Kazan Ilsur Metshin presented the award to Andrey Pisarev, Master of sports of the USSR and three-time world champion in hockey among veterans, director of the Smena sports school. He was awarded the honorary title “Honored Worker of Physical Culture of the republic of Tatarstan” by decree of Tatarstan President for his contribution to the development of physical culture and sports of Tatarstan.

Ilsur Metshin congratulated the hockey player on his birthday.

According to Andrey Pisarev, today in Kazan the younger generation has all the conditions for sports - new sports complexes, well-equipped hockey rinks and much more. When answering the question how to achieve success in sports, Andrey Pisarev says confidently - “Enjoying your work will lead to success”.

For information, Kazan regularly hosts matches with participation of legends of Kazan and Tatarstan hockey. At the end of last year, the honored coach of Russia, one of the best hockey players in the country, Gennady Maslov, took part in a friendly match with students of lyceum №182 in the Salavat Kupere residential complex.

Multimedia
Previous news
I.Metshin on the creation of the largest ecosystem along the Kazanka River: “There is nothing like this throughout the country”
Next news
I.Metshin got acquainted with the modernization of the Kazan Dairy Plant
Personal
Official site