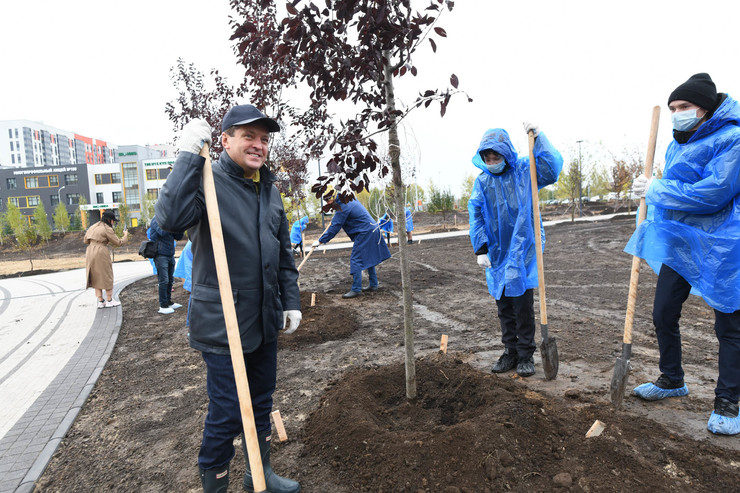 (KZN.RU, June 1, Ksenia Shvetsova). A new multifunctional sports ground opened on the territory of the teenage club “Energetik”, capitally renovated in the autumn of last year. This event was marked by a friendly football match, in which the pupils of the club took part. Ilsur Metshin, the Mayor of Kazan, joined the players. He appreciated the quality of the football field, talked with young athletes, and also inspected the building of an updated institution.

Winners of the tournament “Leather Ball” took part in the first football match that was held on a new site. The team of the teenage club “Romantic” went on the field against the team “Energetik”. Ilsur Metshin, the Mayor of Kazan, supported the players. He made the first symbolic kick of the ball and opened the site.

The new sports ground was long awaited by the pupils of the club and the residents of the nearby yards. “Previously, there was a hockey box, it was empty all summer. Now the children have a place to go. Children will come from the houses of this yard and nearby yards”, believes Valentina Lazareva, a local resident.

Mothers of pupils thanked the Mayor for the new site.

“Recently, we have already made 60 such sports grounds in the city. This is more than just a football field, this is the leisure time of our children”, said I. Metshin. “Parents now have the opportunity to watch their children playing from the window”.

A separate children's playground was built for the very small residents of the nearby houses, on which a holiday was organized in honor of the opening of the new facility.

Health and healthy lifestyle of the population is one of the 12 priorities for the development of Kazan. Over the past year, there has been a significant increase in the number of people engaged in mass sports in the capital of Tatarstan. Last year, the number of residents constantly engaged in sports amounted to 42% and exceeded 475 thousand people. This is largely facilitated by the construction of new sports facilities. Since 2013, Kazan has been implementing a national program for the construction of multipurpose sports grounds. According to this program, 15 such sites were built in the capital of Tatarstan just last year. A number of new sports grounds in the community and a large football field at the stadium “Lokomotiv” are planned to be opened this year.

I. Metshin also inspected the building of the renovated club. Its attendance grew 2 times after overhaul. If earlier 230 people were involved in it, now there are 500 children and teenagers. Their parents are involved as well since a gym was opened on the basis of the club. Evgenia Sabirullova, the club's director, said that after the overhaul, new sports and creative sections appeared on the base of the institution: karate, cross-fit, rhythmic gymnastics, modern dances, English for kids, applied art, and others. “We are striving to introduce new directions to make the classes interesting. For example, children don’t just draw in the drawing class, but also practice applied art: decor, design course, landscape design. After the opening of the sports ground on the territory of the club, we expect an increase in the number of visitors”, said E. Sabirullova. She added that next year, it is planned to introduce new sections, and mainly sports ones since this is the main profile of the club.

I. Metshin talked with the pupils of the club, inspected the gym, visited gymnastics classes and the lesson on landscape design. “It is very important that children have the opportunity to communicate, develop, make creativity, and play sports. They had an excuse to get away from the TV”, noted I. Metshin. “, 16 such clubs have been renovated in Kazan for two years, we will continue this work”.

Today there are 57 teenage clubs in Kazan. More than 15 thousand people are engaged in them: children, teenagers, young people under 35 years old.

Sergey Mironov, the head of the Kirovsky and Moskovsky districts’ administration, Airat Faizov, the chairman of the Committee on Children and Youth Affairs, and others also attended the opening of the sports ground.

Multimedia
Previous news
The traditional staff meeting was held in the Kazan Executive Committee
Next news
I. Metshin about the Universiade: “Undoubtedly, the infrastructure has changed, but most importantly, people have changed”
Personal
Official site