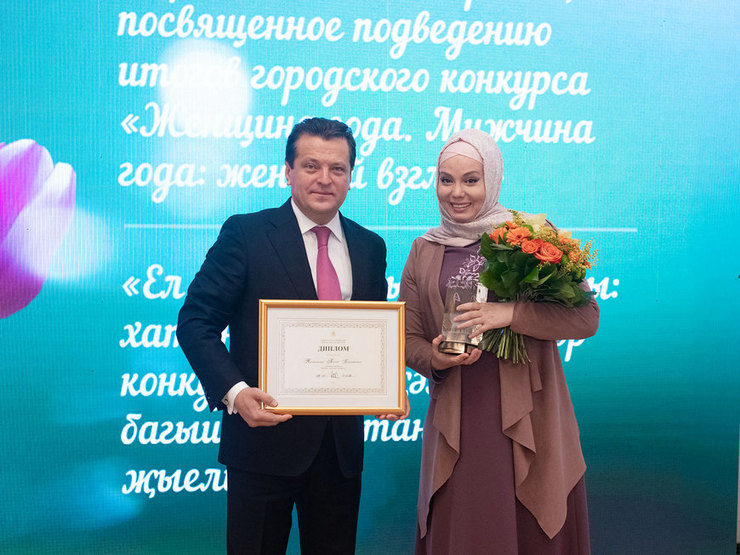 I. Metshin: “This is an opportunity for us to say words of admiration, love and tenderness to our beautiful women”

The Mayor of Kazan awarded the winners of the city competition “Woman of the Year. Man of the Year: women's choice”.
read more
News

Landscaping of the park “Lebyazhye” started in Kazan

Rustam Minnikhanov, the President of Tatarstan, congratulated the citizens with the beginning of large-scale works. “We had planned to start the work last year. The first phase includes the restoration of the territory, construction of pumping stations and pipelines for pumping water. In general, the park "Lebyazhye" renovation project is a project of restoration of lakes and spaces that existed here. I am grateful to the designers and environmentalists who carried out the necessary work, but it still must be complete. Also, I am grateful to joint-stock companies “TAIF” and “Kazanorgsintez”, which will implement the bulk of the program. We encouraged the business to take part in the project, because we understand that Lebyazhye is unique natural space”, said the head of the republic.

Rustam Minnikhanov noted that the first results of the work citizens will be able to see the next year. The President expressed hope that the park "Lebyazhye" will be the most favorite place of recreation for residents and visitors after the renovation.

Albert Shigabutdinov, the general director of OAO "TAIF", declared his readiness to support the project. The company is ready to take part in the financing and organization of activities to finalize the draft environmental rehabilitation and construction of pumping station. "Today is the beginning of serious work on the restoration of water resources complex of Lebyazhye lakes. I, as a resident of Kazan, express gratitude to Rustam Minnikhanov for the huge amount of work that are performed in the republic, especially in Kazan, on the improvement and creation of leisure for the citizens. Much work has to be done at the park "Lebyazhye", which has to be executed in a short time. We should all make efforts together to bring this area in order. The President set a task to Lebyazhye became the favorite vacation spot for citizens. We all have to realize this task in a short time”, said Albert Shigabutdinov. “TAIF” will also be an investor of landscaping of Lebyazhye lakes adjacent areas. It is the second equally important part of the renovation project of the park.

The area of ​​the Lebyazhye lakes system is 200 hectares. 2 parking zone with 228 parking spaces have been set near the lake in 2015, in the Year of parks and gardens in Tatarstan. The first is proposed to restore the ecosystem of lakes, to fill lakes with water, to develop the infrastructure for recreation for the citizens in the most visited areas (beach, ski base "Dinamo", a platform for Sabantuy and others), to lay a network of lighted pedestrian pave roads and ski runs.

Work on the rehabilitation of Lebyazhye Lakes (Maloe Lebyazhye, Bolshoe Lebyazhye, Svetloe, Suhoe) consists of several stages. The first stage includes ecological, geological, topographical surveys and the development of design solutions (it will be performed by OAO “Institute “Tatvodproekt” and Nafisa Mingazova, the doctor of Biological Sciences, the professor of KFU). The contract for this part of the work with the OAO "TAIF" has already been signed; the work is partially carried out. After completion of the work it will be necessary to obtain the opinion of environmental impact assessment of the project.

The environmental remediation, which includes waterproofing the bottom of the dam device between Suhoe and Svetloe lakes and, clearing the coastal zone will be made on the results of the two stages. The construction of the pumping station at the Izumrudnoe Lake and pipelines for pumping water will be one of the main types of work. The project for this type of work, which was made by the Institute “Soyuzhimpromproekt” on sponsorship, is already available.