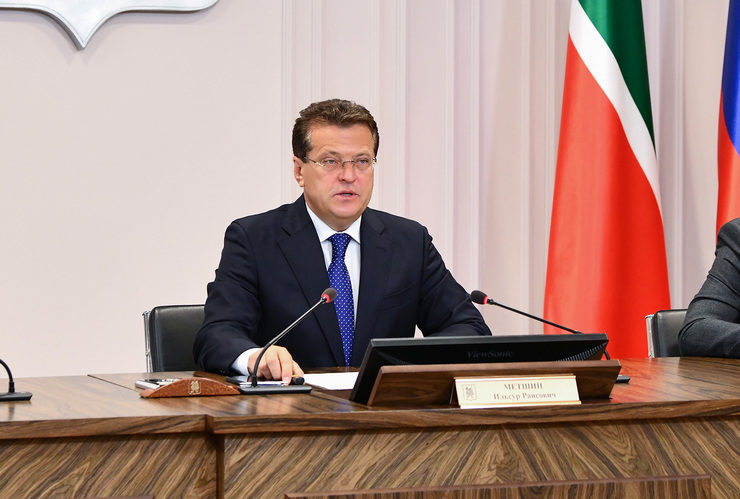 The overhaul of the administrative building of the Savinovo Sports School has been completed in the Novo-Savinovsky district of Kazan. Now young football players have a training pitch, as well as their own base with all the necessary equipment. The Mayor of Kazan Ilsur Metshin looked around the sports school and congratulated its trainees on their new venue.

The Savinovo Sports School was established in 2000, but the players did not have their own base, so last year it was decided to allocate the premises of school No.113, where the shooting range was located in Soviet times. “We came here when the building was dilapidated and completely unsuitable for use. Now the renovated premises are equipped with locker rooms and coaching rooms – all conditions have been created for young athletes to achieve great results,”- the head of the city said.

Alexey Shuvarov, Director of the Savinovo Sports School, conducted a tour of the renovated administrative building. During the renovation, new doors were installed here, toilets were renewed, tiles were laid, the front of the building was repaired and insulated, the premises were redecorated, and the entrance are now accessible to disabled visitors. Today, almost 500 young football players train at the sports school, 42 of them with hearing impairments.

After the renovation, 4 locker rooms, a coaching room, bathrooms accessible to children with disabilities, a reception, a storage room for sports equipment, an office of the director was equipped in the building with an area of 383 sq.m. The Mayor of Kazan highly appreciated the results of the overhaul. “The locker rooms are equipped as the locker rooms of professional football teams”, - the Mayor noted.

After the tour, Ilsur Metshin met with the students of the sports school and presented them nets with new balls and a certificate for 100 thousand rubles for new sports equipment. “To achieve good results, continue to train and improve your skills”, - the head of the city addressed the young athletes.

In 2018, a football pitch 94x63 meters was equipped for young football players. Together with them, hockey players of the Dynamo Youth Sports School trained here, now their classes are held on three run tracks with a rubber coating, which were equipped this year. In addition, a jump pit for training track and field athletes was setup next to the pitch.

Presently, almost 3 thousand children and teenagers play football in sports schools in the capital of Tatarstan. Another 19 thousand Kazan residents regularly play football. In total, there are 165 football pitches and 7 indoor football arenas in the city.

For reference, the overhaul of the Motor sports school, the Molodaya Gvardiya sports camp, as well as the construction of the fourth open-type sports and recreation complex on the territory of School No.49 is currently underway in Kazan. By the end of the year, design work will be completed on the construction of a basketball center in the Vesna residential complex, a gymnastics center in Salavat Kupere district, as well as an arena for the Kazan equestrian complex.

Multimedia
Previous news
The renovation of gymnasium No.18, schools No.131 and No. 143 is being completed in Kazan
Next news
The section of the Great Kazan Ring Road will be opened on Mekhovshchikov Street in September
Personal
Official site